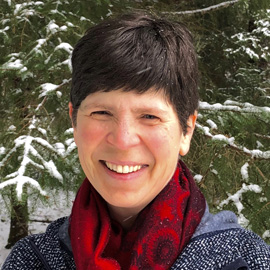 
I WAS is a lyrical picture book about animal skulls, narrated by the skulls themselves. Presented with a sense of pride and value in the life that was, the text aids young readers in understanding the function of the different bone forms that allowed each animal to compete and survive in the wild. Author Katherine Hocker notes: "When I bring skulls into the classroom, kids sit up with excitement. At first they're squeamish, but as they run their fingers over the teeth, gaze into the eye sockets, they learn that skulls are more than just spooky thrills. Skulls tell the stories of the animals that once inhabited them."

Katherine Hocker is the author and illustrator of three self-published children's picture books, one of which, THE SINGER IN THE STREAM, was later published in a new edition (Yosemite Association). She is also the author of a middle-grade science book, FROZEN IN MOTION: ALASKA'S GRACIERS (Alaska Geographic).

I WAS (Candlewick; Natasha Donovan, illustrator)